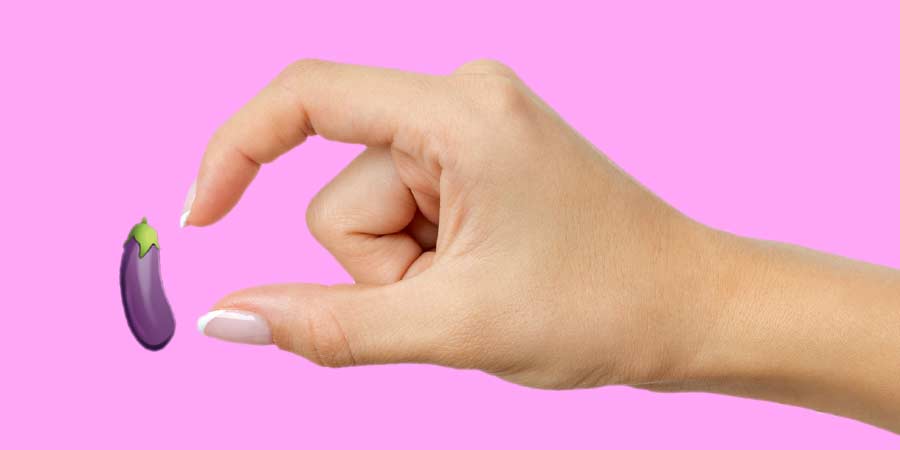 An emoji is the contemporary way to liven up a message, express our moods, and quickly reply to a dozen messages with a single symbol. We love them! So we were very excited that Emojipedia have unveiled new emojis which are due to be released later this year. But it’s one little emoji that has tongues wagging and the internet buzzing.

Although it may just look like a hand which is pinching something we all know it’s the universal gesture for something small and in particular a shaming gesture used to indicate something small below the belt.

So we’re confident that no one is planning on using this emoji to convey a pinch and it’s destined to become bigger than the eggplant (pardon the pun) when it comes to sexting and specifically replying to unsolicited dick pics.

Body shaming aside, because it’s really not about the size, it’s about the lack of consent and women not wanting to respond because, well, some men will take any response as a positive. This emoji will quickly convey that you’re not interested.

So let’s look at some of the funniest responses on Twitter.

Apple may call their new #emoji a 'PINCH', but women everywhere know it's the 'INCH'. 😂🤣 This one will be in my constant rotation. 🔎👀 pic.twitter.com/bhuoaI5PLo

The first thing I thought of when I saw the 'pinching hand' emoji was Ross from Friends 😂. It just needs to be the full hand to make it even better - could 'quiet hand' emoji be a thing? @DavidSchwimmer #emoji12 pic.twitter.com/mMjjPvfuYR

It's over for us men

Any argument with a woman they just reply with this and we've lost https://t.co/uY8YBqtNQg

Ladies are gonna abuse this emoji, if y'all know what I'm talking about. https://t.co/48SZS2dXlI

So cute that they are calling this emoji "pinching hand" instead of "tiny cock" or the full name: "omg, you call that a cock?!?! it is so SMALL" https://t.co/fVSpZu70vC

girl group chats about to get 50% more savage https://t.co/UPp7QTgtXI