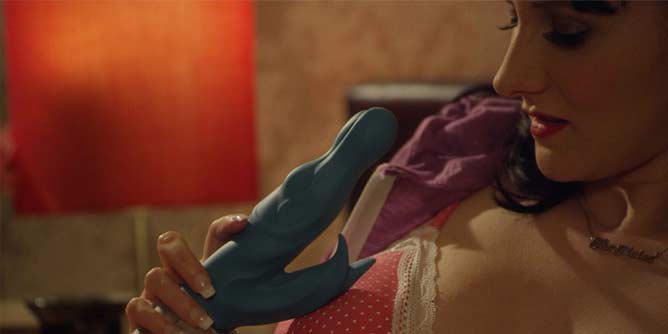 Welcome to our new blog series “Chicks in Charge” where we chat to women who have carved a successful niche in the adult industry.

How would you explain to people unfamiliar with your work & career what you do for a living?

I read an interview where you said your passion was "making films that focused on women's sexual desires and fantasies, objectifying the male body and bring a female gaze to the genre". Can you explain what that means?

What do you love most about what you do?

What’s not to love about what I do??  Seriously, I love it!  I get to go to work with people who I admire, who are a lot braver than me and have such an open, healthy attitude towards sex and sexuality.  Communication and transparency is very important in this industry, so it refreshing to have open and frank discussions about anything and everything to do with sex and sexuality.

I get to be creative and see some of the most amazing things.  The first time I ever saw a woman ejaculate was when I was shooting a film featuring Zahra Stardust, I was fascinated and very honoured to have the privilege.

Overall, I think Australians have a healthy attitude towards sex and sexuality on screen.

Even in my non-explicit work, people have always commented that I had a very European aesthetic!  My influences have been more from arthouse films.  Two of my all-time favourites are a Spanish film by Julio Medem called “Sex and Lucia” and French film by Claire Denis “Friday night”.

If you had to describe the typical Australian woman you think your movies appeal to, what's she like?

She wants to explore and grow her sexuality in a safe environment.  I think she can be any age, I have had letters from women and couples in their 70s!

Has there been a career highlight or an ah-ha moment?

Oh which one do I choose???

Was there anyone who you feel influenced the direction you chose for your films either through being a role model or where you felt you could do it better?

Candida Royalle, who started making films aimed at women and couples back in the 1980s was a huge influence on me!  I loved that her films had storylines, characters and hot sex scenes!  I contacted her in the early 2000s after I had a particularly horrible meeting (where a company purporting to be female friendly, had said “why would we invest in you when we can pay a woman $50 in some eastern European country to do double penetration!).  She was always very generous with her time and encouragement, she even gave me her home phone number so that we could talk.  I got to meet her at the Berlin Porn Film Festival in 2009.  Unfortunately, she passed away in 2015.

You had to crowd fund to make The Bedroom a reality and you've invested your own money into the projects. What can Australia do better to ensure there are more creative film makers out there?

Do you have advice for someone keen to get into adult film making?

Do your research and be professional, this is a job.  I get contacted by lots of people who think this is quick way to make some money, it's not and no one likes a flake.

It’s important to be professional, treat people with respect, be excellent at communicating and most of all be upfront and transparent about what you are doing.

Do you have a bucket list of things you haven't done or is there someone you'd like to collaborate with on a future project?

Are there any myths about the industry you'd like to debunk?

One of the biggest is that women are exploited.  Yes there are some companies that aren’t above board, but that is with any industry.  All the women who are involved are there because they have made an informed choice.

People often ask me if I get turned on while shooting my films.  To be honest, I spend most of my time looking at a monitor, making sure the framing works and have we got enough footage for editing, etc, so I’m quite removed from the fact people are having sex in front of me.

However, during the filming of one sex scene, I briefly looked up from my monitor to see one of the performers looking at me, while he was having sex.  Our eyes met and I was taken aback that there were people in front of me having sex.  It was quite unnerving (I also found this performer quite attractive!), but I had to quickly regain my composure and return to looking the monitor.

If you could give the younger you some advice about your career what would you say?

Be even more fearless and don’t let explicit define you completely as a person!

You can purchase your copy of The Bedroom online.