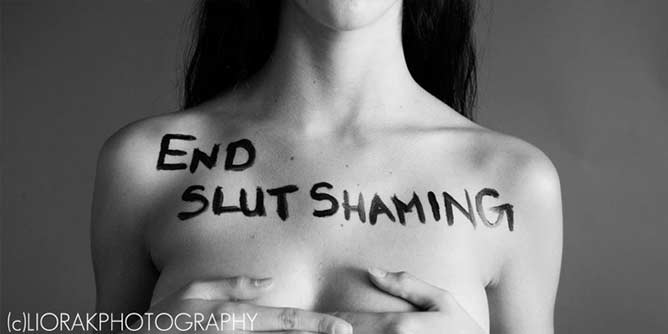 You're not going out in that!!

Now for the guys. How many times have you thought that? That a girl in a tight dress is “asking for it”? Or that “I wouldn't let MY girlfriend/wife go out like that.”

You may think you're “protecting” her or showing concern for her well being... But you're not.

You're slut shaming, and it's time we all stopped.

So what exactly is slut shaming? The words are thrown around a lot but in the most basic of terms, slut shaming is the practice of shaming and humiliating a sexual woman for being, well, sexual.

It can be as overt as that time all those vacuous news reporters blamed Jennifer Lawrence etc for someone stealing and leaking their nude photographs, or it can be more subtle like those “In a world full of Kardashians be a Princess Diana.” memes. All of these things are designed to make women feel guilty and ashamed for being sexual, whether in public or private, and put the responsibility of assault in the hands of the victim and not the attacker.

The very idea that a woman is somehow responsible for her own attack is ridiculous and I honestly cannot believe, almost 20 years into the new millennium, that people still think an item of clothing is to blame for someone else's choice.

Seriously. Clothes do not cause rape. Women have been raped while being dressed in jeans, In burqas. In dresses. In pyjamas.

Walking alone does not cause rape. Women have been raped while at home. While at parties. While on holidays with family.

Being drunk does not cause rape. Women have been raped while sober. While high. While recovering from surgery.

The ONLY thing that causes rape is a RAPIST.

The choice a person makes to harm and violate another person.

In fact, as insulting as this is for women I am surprised this sort of rhetoric doesn't make men angrier.

In the context of rape conversations the anger of men is usually very misplaced. Instead of being angry that the idea of a woman “asking for it” basically infers men are mindless animals with no self control or ability to act like a human, men get defensive and angry and cry “NOT ALL MEN!!” which is true, but completely irrelevant. The thing is, guys, it's actually not about you.

Every woman, at one time or another, has had the experience of feeling unsafe in the presence of men. I am very lucky. I have never been raped. I have, however, been groped on public transport, had cars full of men catcall and follow me down a dark street. I have walked through car parks with my keys in my hand, been called a whore for not accepting a drink from a stranger. I have been ogled and leered at and treated like shit because I have boobs and a vagina. And every single woman in the world will attest to something similar.

The statistics show that one in three women will be physically assaulted in her lifetime. Men are also attacked and raped and must not be left out of the conversations at all, but the overwhelming majority of ALL attackers, regardless of if the attack is towards a male or a female, are perpetrated by men. This is fact. And the only thing to be getting angry about is that it happens. Not that you personally haven't done it.

The Problem With Rape Prevention

If you have ever uttered the words “don't go out in that or you're asking for trouble” do you know what you're really saying? You're basically saying “Make sure he rapes another girl.” and that, my friends, is a disgusting attitude to have. You may not think of it in such a linear way, but that's essentially what “rape prevention” education is all about.

It's about making sure he doesn't rape you and, quite frankly, that isn't good enough. In fact it is downright wrong.

Conversations and education around assault need to change. Attitudes to women and sexually active women need to change. The idea that women are sexy only for men and the minute they want to be sexy for themselves they are some sort of whore needs to change.

The analogies of “uncovered meat” and “you'd lock your car up” are not only insulting as hell (women are not cars or plates of meat) they are completely misleading and take away from the human side of it. I have often asked men who say those sorts of things how many women they've raped? They usually get angry and defensive and call me a feminazi whore... But it's a valid question in that sort of context. If my clothes made that man rape me, how many clothes have made you rape?

A far better analogy would be that a man in a nice suit walking out of the bank somehow deserves to be mugged. That a professional boxer walking down the street is just “asking to be beaten up”. That a person who gets car-jacked is to blame for owning a car. These are all utterly ridiculous statements that would be laughed out of a court or police station... But these are the very things courts and police say to women about their attacks. That they are somehow to blame. In fact it was this very thing that led to Slut Walk.

In 2011 a police officer speaking at York University in Canada told the listening crowd that (paraphrased) “Women shouldn't dress like sluts if they don't want to be assaulted”.

This greatly angered and upset the crowd (of both men and women) and, in the days following, the now global movement of Slut Walking was born.

In a similar act of protest that the “Reclaim the Night” marches began, women and men from all over the world are standing up and saying 'Bullshit!” What we wear and how we act should have absolutely NO relevance to our personal safety whatsoever. The crowds get bigger every year and people wear anything they like from body-paint or bikinis, to burqas or ball gowns. The message being clear: Our clothes are not to blame for an assault against us.

I have to say, honestly, it feels so weird that I have to even write an article in 2017 that states this. It feels so weird that I am raising a teenage daughter and the mothers of boys the same age have asked me if I've warned her about rape, but get defensive when I ask them if they've told their sons NOT to rape. These twisted ideas about women and their bodies need to stop, and it starts with us.

Slut is not a dirty word!

The word slut is one that has been fraught with shame and distaste and disrespect. It is a word we use to insult and belittle and control women who are "too" sexual. Of course we also have "prude" which is used for women who aren't sexual enough... And it's just bullshit. Seriously.

Women throughout the world are beginning to stand up strong and say "I will not be shamed for my sexual side". Women are taking the word once used as a way to control and tame them, and are making it their own. Basically: "If a sexual woman is a slut... And I am proud of being a sexual woman... Then I am proud to call myself a slut and own the strength and power it gives back to me."

And I for one celebrate this taking back of sexual power. We deserve it. And I'm not the only one.

"SLUT...Sexy Liberated Uninhibited Temptress...whats not to love about that. Add the term ethical and there it is. Nobody should have hang ups about having fun." RideNSlide69

Don't be “that person”

The next time you feel like making a disparaging remark about a celebrity who's gone nude, or some chick you know who fucked some guy she only just met... Every time you think to yourself “omg she is not going out in THAT?” about your wife, friend, daughter... Stop it. Stop it and think about where it is coming from.

Yes I know so many dads out there will be saying “but I remember what I was like at 14. I don't want my daughter to have to experience that...” Well yes, true... BUT DON'T BLAME YOUR DAUGHTER! Seriously. If it bothers you that much that you're willing to screech into a feminist's ear that it's “not all men” then bloody go and do something about it. Start a “men to mentor boys” group. Go and speak at your local high school. Teach your sons about consent. Teach the boys in your life to not be the misogynistic shit you were at that age.

We spend so much time teaching girls to be wary of boys, yet the conversations with boys so rarely touch on what is acceptable or not.

You want to change the rape statistics for your daughters? You are where that starts.